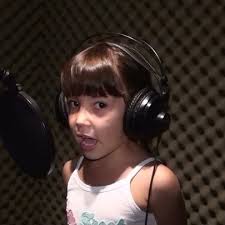 This 11-year old diva has been working at one of the most famous evening television show programs broadcast on one of our national televisions for the last two years. Yet, I hadn’t heard of her until two weeks ago. And I did so by chance while searching through related articles on a related topic. Hey, Mayor, so much for your campaign on promoting young talents outside the comfortable realm of Rousse. If I were you, I would fire half of the PR crew for failing to promote this incredible voice.

Tereza took up singing when she was two years old. At four she started performing on stage in the city and her talent didn’t go unnoticed—a teacher at the Municipal Center for Art and Culture began to train her for a professional singer. At five she ventured the piano and took her first lesson so that when she became 6, she was admitted to the National School of Arts in Rousse. Currently, she also dances and, as they say, enjoys creating the choreography on her own.

She was brought to national fame in 2013 when the talent-searchers of the Slavi’s Show, who were looking for a girl to accompany their youngest show performer on stage—a boy telling jokes—came across her. Throughout her career she has won numerous awards at home and abroad, and in 2015 she went to New York to play the piano in Carnegie Hall after ranking second in the American Protégé international competition. During the same year another international recognition followed—the one from the Premio Accademia di Roma, where she got an unprecedented 11-point result at the Cantagiro competition.

I watched part of an interview with her, held in the presence of her mother. Instead of some childish gibberish that I was half-expecting due to her infancy, this beautiful young lady presented herself in such a charming and respect-commanding manner, that unwillingly, while watching her, I was engulfed in what she was saying and was smiling too, forgetting all the evil in the world. Her confidence and spontaneity in front of the camera, and her avid and sparkling eyes with inspiration conquer you and speak of a great potential and talent.

Listen to her latest song here. Again on Youtube.com you can listen to her incredible cover of Camino, a song originally sung by Lily Ivanova and which won Tereza one of the greatest recognition by the Italian public.