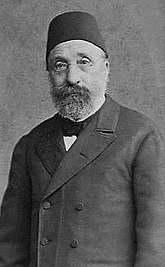 Mishat pasha is one of the most controversial personalities from the new history of Bulgaria and, in particular, Rousse. An economic and administrative reformer, an influential representative of the Ottoman Empire before the world at a time when Bulgaria had been under Ottoman rule for more than 450 years, uncompromising in his political views, cruel in suppressing the discontent of his subordinate “raya” (slaves, as referred to Bulgarians at the time), he played an actual and very important role in the development of the then Ruschuk (Rousse) from a typical small town, subordinate to the Ottoman Turks, to an economic, judicial, and administrative center and in the city transformation into the largest Bulgarian town in the Principality of Bulgaria after the Liberation of Bulgaria from Ottoman rule in 1878.

Decades before our Liberation from Ottoman rule, Midhat Pasha led Ruschuk on the road of innovation and renaissance. However, he is also one of three representatives of the Ottoman Empire who were commissioned to suppress the Bulgarian April Uprising of 1976 – which out of fear and surprise they did with such ferocity that the response went across Europe and the Great Powers convoked the Constantinople Conference. Midhat Pasha was also one of the people who disregarded the decisions of the Conference because of the recently launched by him and accepted by the Sultan First Ottoman Constitution. In this way, he indirectly provided Russia with grounds to declare war on Turkey.

And now, let me share with you the facts I have found about Midhat Pasha. As for history, let it talk for itself about its protagonists… 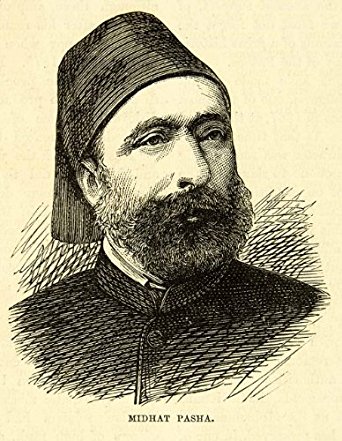 Midhat Pasha was born as Ahmed Sheffik Midhat Pasha in Constantinople in October 1822. His father was a kadia (judge) born in Rousse and a strong supporter of the reforms in the Ottoman Empire. Midhat Pasha spent his childhood in Constantinople, and the Bulgarian towns of Vidin and Lovech where he received good education and mastered several foreign languages.

In 1844 he became secretary of Faik Efendi and accompanied him to Syria for three years. He returned to Constantinople to serve in the central administration, traveled back to Syria, and then was appointed Second Secretary of the Sublime Porte (something like a parliament, was responsible for the state policy).

In 1854 his opponents managed to remove him from the post and as a result he was burdened with the then perceived as an impossible task to deal with the bandits and dissatisfaction in the Rumelian provinces (in general, by Rumelia the Ottomans refererred to the Balkan Peninsula territories). After six months in the region, however, Midhat pasha managed to capture 284 robbers and to pacify the districts of the towns of Shumen and Sliven.

In 1857 he was sent to the Bulgarian town of Veliko Tarnovo as a government representative to investigate the conflict between the Greek bishop Neophyte Byzantios and the local Bulgarian population (in short, Neophyte Byzantine was elected Veliko Tarnovo region bishop due to corruption and was at the time acting against the Bulgarian revival which was the cause of the conflict). As a result, Midhad Pasha ordered the release of the accused and arrested people and the Greek bishop was dismissed.

Because of these successfully accomplished tasks, his career prospects became even brighter and in 1860 Midhat pasha was appointed Vizier (similar to a minister having both military and administrative power) and Pasha (a governor, a high official). He was entrusted with the management of the Nisyan eyalet (an administrative district) and the reforms he applied there impressed Sultan Abdulazis who demanded him to implement the same reforms throughout the entire Ottoman Empire.

Danube Vilayet and Reforms in Ruschuk and the Region 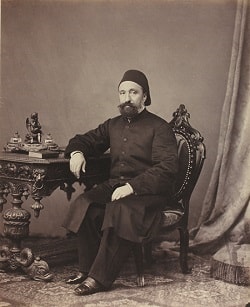 In 1864 the Dobrudzha lands, which include the whole Danube plain, the Sofia and Samokov fields, were united in the so-called Danube vilayet (an administrative unit) with its center located in Rousse – or Ruschuk as it was called back then. Midhat Pasha reformed the administration and the judiciary systems by creating new and reorganizing existing institutions. For the first time an Ottoman province acquired a representative institution, the General Council of the Vilayet, in which representatives from the various religious and ethnic groups in the area, including Bulgarians from Rousse, Sofia, Tarnovo, Shumen and others, were appointed or elected. Midhat Pasha allowed Bulgarians to occupy senior judicial positions and initiated the creation of the Danube Weekly – the first official Ottoman media issued in the period 1865-1877 both in Turkish and in Bulgarian languages and where Bulgarians were also working.

In 1865 Midhat pasha ordered the making of the Arabakonak Pass which connected Sofia with Northern Bulgaria passing on the way to Pleven and Rousse. On October 26, 1866 the first Bulgarian railway line from Rousse to Varna was officially opened. Altogether, Midhat pasha’s rule led to the building of 553 kilometers of new and the repairment of 255 kilometers existing roads, 237 new bridges while, as expected, these activities seriously burdened the local population with taxes and many of the people worked on these new infrastructure without being paid.

At Midhat pasha’s initiative, the famous Bridge by Kolyu Ficheto over the Yantra near the town of Byala was also built.
In July 1868 Midhat pasha took over the management of the Danube vilayet again because of the entrance of Hadji Dimitar and Stefan Karadja’s detachments in Bulgaria. He organized the persecution of the rebels, conducted a quick trial for the captured and imposed public executions. He also endorsed the mobilization of the bashbizouk (Ottoman military troops) of Circassians and Turks in spite of the fact that he admitted they could commit “extreme actions”.

Suppression of the April Uprising and Convocation of the Constantinople Conference 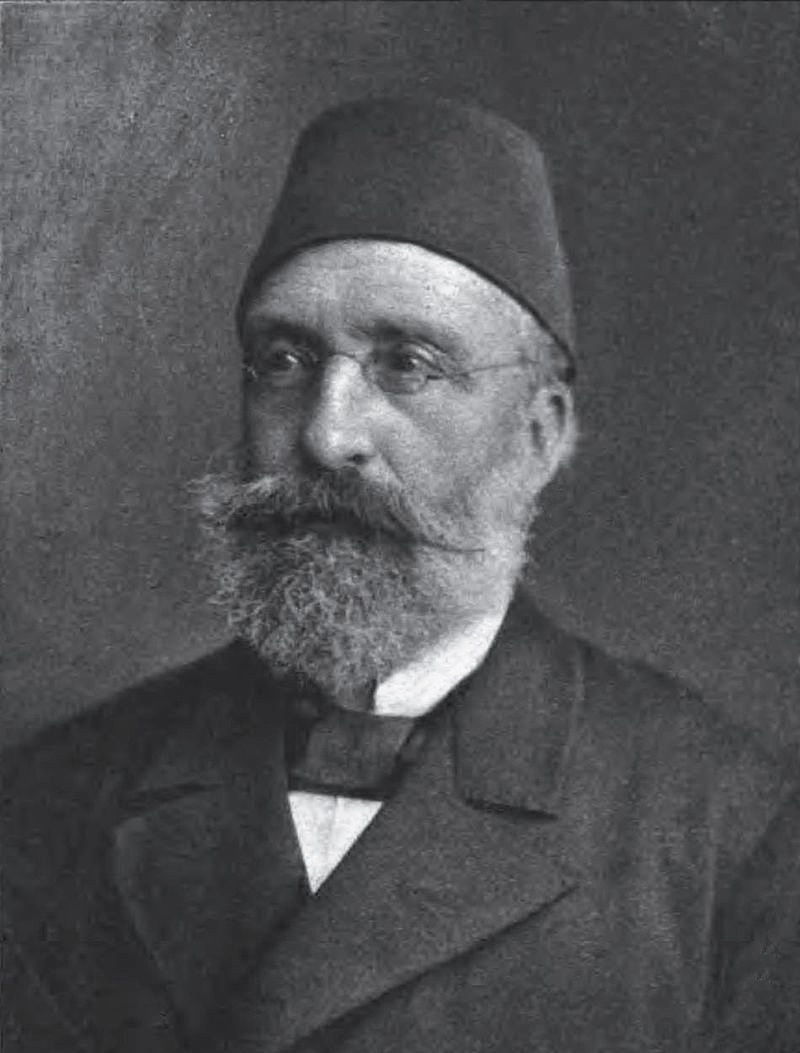 The April Uprising is a milestone in the history of Bulgaria. It is an entirely Bulgarian initiative and its preparation and outburst were not supported by any external country. It had to be organized in a very short period of about 60 days and broke out months earlier than planned due to unfavorable circumstances. The Turkish authorities were on their guard because of other related events at the time – they prepared themselves for a possible rebellion after Stara Zagora’s rebellion attempt and after the Bosnian-Herzegovina uprising. These added up to the causes which led to the practical failure of the April Uprising of 1876. However, the Uprising played a decisive role in the Liberation of Bulgaria for the strong international response it received because of the cruelty and ferocity with which it was severely suppressed.

The start of the April Uprising surprised and provoked panic among the Ottoman rulers. In order to suppress it, the High Porte created a council of three commanders, including Midhat Pasha who proved to be a major factor in decision-making. The council mobilized a large part of the available Ottoman troops attracting soldiers from Asia Minor and Africa. They also mobilized the stock, transfered thousands of troops by train and water so that tens of thousands of armed Ottoman soldiers often faced a few hundred April Uprising rebels. The Council issued a warrant for killing the civil population, forfeiting their property and setting fire to their homes. The Batak slaughter in which more than 3,000 people are slaughtered or burned alive is one of the most cruel appearances on the Ottoman side. At the bottom line, against the full momentous power of the Ottomans, the Bulgarian armed forces that were able to rebel without any real preparation amounted to 10,000 men and 95 Bulgarian villages and towns.

The result of the Uprising was the convening of the Constantinople Ambassadorial Conference which took place between December 23, 1876 and January 20, 1877 and in which the ambassadors of the Great Powers who were accredited by the High Porte took part.
The reasons for holding the Conference were several: the uprising of 1875 in Bosnia and Herzegovina, the April Uprising of 1876 in Bulgaria, the subsequent war between Serbia and Montenegro, on the one hand, and the Ottoman Empire on the other, and the preparation of Russia for war with the Ottoman Empire on the Balkans.

Murder of the Sultan and Death

After the withdrawal of Midhat Pasha as the leader of the Danube Vilayet, two radical points of view faced each other in the Ottoman Empire – the viewpoint of the status quo and the reforms supporters. Midhat pasha allied with the great Vizier and the Military Minister in 1876, and in May they brought down the Sultan who was killed the following month.

Even though Midhat pasha, as we mentioned, was once again a great Vizier and initiated the preparation and adoption of the first Ottoman Empire constitution, in the beginning of 1877 he was expelled and sent to exile, and in 1879 he faced a charge of involvement in the murder of Sultan Abdulaziz and was sentenced to death. However, after the British government intervened, the death sentence was renounced, his life spared, and the last three years of his life Midhat Pasha spent in prison in the city of Taif, near Mecca, where in 1883 he was allegedly murdered.