In collaboration with Jennifer Atanassova

One of the most famous musicians in the country and abroad, Svetlin Rusev is a violinist and a violin teacher and is internationally recognized for his talent and mastering skills.

He is born in Rousse in 1976. Although his dream is to become a fighter pilot, he takes his first violin lessons from his mother at the age of five and is admitted to the National School of Arts in the city.

In 1991, the famous clarinet player Mr Koycho Atanasoff invites him to a concert-recital in Paris. After the event, the young virtuoso is noticed by representatives of the Paris Conservatory and at the age of only 15 he is accepted to the Conservatory. Among his professors are Devi Ehrlich and Jean-Jacques Kantorow. In 1997 he settles in Paris and later on marries his now wife Fleur, together with whom they have two children – Chloe and George. Their second names are Mila and Simeon respectively. He speaks with them in Bulgarian only.

Svetlin Rusev is awarded the 2006 Musician of the Year prize in Bulgaria. Throughout his career he wins numerous international prizes. Some of the most prestigious ones are from the competitions in Indianapolis and Melbourne as well as the Marguerite Long – Jacques Thibaud award. In 2001 he wins the Grand Prize, the Special Audience Award and the Special Award for the best interpretation of a Johann Sebastian Bach’s concerto at the First International Competition in Sendai, Japan. Svetlin Rusev plays a 1710 Camposelice Stradivarius, which is kindly provided by the Nippon Music Foundation. 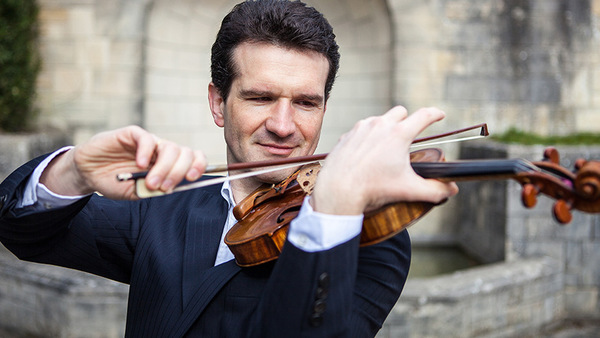 Since September 2008 he has been a Professor in violin at the National Higher Conservatory in Paris. In Bulgaria, he leads master classes. He also works with the Bolshoi Theatre, Suntory Hall, the Seoul Center for the Arts, the Champs-Elysees Theatre and plays alongside some of the world’s most recognized musicians.

A more extravagant activity is his participation in the Tangisimo ensemble with who he plays Argentine tango. The ensemble has visited Bulgaria on several occasions too. Yet another creative project in which Svetlin Rusev has taken part is the Rusev-Salk-Rozanova piano trio that is highly appreciated by the international audience.

An incredible virtuoso, Svetlin Rusev plays his violin in such a way that it brings ages, feelings, events, and relationships to life and paints pictures which are effortlessly followed by the imagination. Judge for yourself: https://www.youtube.com/watch?v=W839DuQcadE.