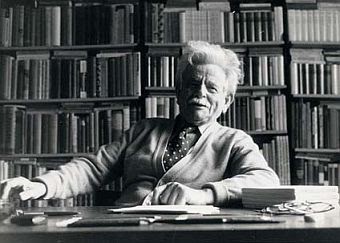 So far the only Nobel prize laureate of Bulgarian origin, Elias Canetti was born on July 25 1905 in Rousse as the eldest of the three sons to Jacques Canetti and Matilda Arditi. His mother comes from one of the oldest Sephardic families in the country, who are also among the founders of the Jewish colony in Rousse in the late 18th century. The kin can be traced back to the 14th century when the ancestors worked as court physicians and astronomers at the Aragonese Royal Court of Alfonso IV and Pedro IV.

By the age of six the family lives in Rousse, where Elias’ father and grandfather develop a successful production plant for umbrellas and also trade with glass, paints, varnishes, and other household goods. In 1911 the family moves to Manchester, where his father takes part in the family business there. In 1912 Jacques Canetti suddenly died. His mother was desolate and alone with the three children. She moved then first to Lausanne in Switzerland and then again to Vienna in Austria.

Besides the languages he already knows – Bulgarian, English and French, Elias learns German as well. In 1921 the family moves to Zurich and in 1924 to Frankfurt, where he graduates from high school. In 1924 he became a student in chemistry at the Vienna University to graduate with a doctorate in 1929.

In 1934 he marries writer Veneciana (Veza) Taubner-Calderon, who is eight years older than him and is to become his muse and literary assistant. When Austria joined Nazi Germany and the persecutions of Jews began, the Canetti moved to Paris and then London to finally settle in Britain. Elias gets married a second time after Veza’s death and has a couple of affairs one of which with the Irish poet Iris Murdoch.

Though writing in German, in 1952 he receives UK citizenship and remaines in Britain until 1970. The last 20 years of his life he spends mainly in Zurich. There he writes his autobiography. Its first part published in 1977 is “The Tongue Set Free”, where he describes the first years of his childhood he spent in Rousse, then the time when the family moved to Britain, his father’s death and the subsequent relocation of the mother with the children in Switzerland.

1981 brings about the Nobel Prize for Literature for Lifetime Achievement “for writings marked by a broad outlook, a wealth of ideas and artistic power”. Apart from the Nobel prize, he received recognition by winning a number of other international awards.

Elias Canetti has been a sensitive boy and grew up to become an intuitive man. Rousse, where he spent his first childhood years, is colourful and dynamic with people of different backgrounds and from various cultures and he is exposed to variety of languages. The heavy loss of his father and the two world wars later on also affected his personality and marked his work. The main topics gradually to become characteristic of his works are fear, death, evil and power. Gradually, the writer shares the idea that death and evil are identical and represent one whole. Strong influence on his works have also Franz Kafka, Georg Büchner and the psychoanalytic school of Sigmund Freud.

The philosophical Crowds and Power is considered to be his masterpiece and is completed only in 1960. In it he uses the description of the elementary experience of being a part of a crowd to reveal the conditions and dynamics of the masses. As a result, he makes immersive conclusions about the mechanics of power, namely, that the crowds and power are inherently and constantly connected.

In 1994 Elias Canetti dies in Zurich. His works are translated into 25 languages.