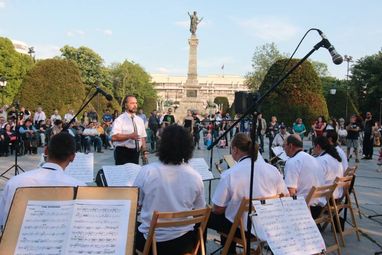 Yet another evidence of the long-lasting traditions in musical art in the city is the Municipal Brass Band Big Band Rousse. For over 50 years now not only has it been affirming musical talents, but also developing them by creating its own sound style and working on joint projects together with national and international artists.

The band is established in 1963 as a civil formation of musicians. Its first conductor is Maestro Stefan Vachev. The orchestra is actually the successor of the military musical bands which brought about the orchestral idea to Bulgaria in the 19th century having Czech musicians visiting the country. These later became the founders of the brass music in our country.

As of 1995 the conductor of the brass band in Rousse is Mr Dimcho Rubchev. With the support of collaborators and other professionals, he further develops the orchestra in such a way that its music is now recognizable by its innovative approach and dynamic performances while accompanied by the high professionalism of the musicians. Gradually, Big Band Rousse became one of the city emblems of cultural life.

Among the guest soloist of the band are some of the best Bulgarian jazz musicians – Angel Zaberski, Mihail Yosifov, Ventsislav Blagoev, and Hilda Kazasyan.

For the band’s musical achievements they are awarded the special prize by the Ministry of Culture and the Cyril and Methodius 1st degree medal. They are also the first brass band to be nominated in the Crystal Lyre National Contest in 2013 and 2014 in the Orchestra Art category. In 2013 the band receives four awards from the Union of the Bulgarian Musicians and Dancers.

Listen to the band perform their Friday Concerts Cycle here and to their live performance together with Hilda Kazasyan here.