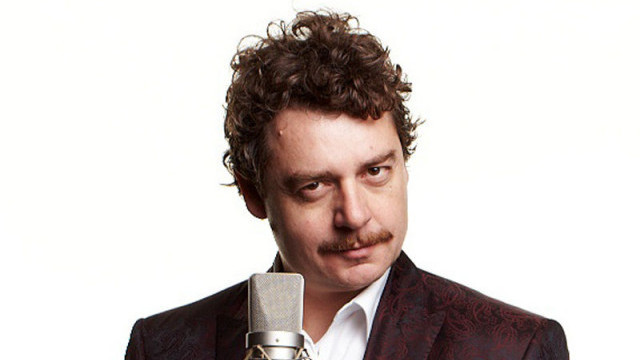 I wish I could tell you something you haven’t read about Kamen Donev; or that he himself has not communicated about his personality through the wording of his performances, through the dances and choreography he creates, or the irony and patented sense of humor he exhibits, all of which reveal a sincere love for Bulgaria, its past and present, people and traditions.

Kamen Donev is an actor, director, playwright, and choreographer. Born in Rousse, he graduated from the class of Krikor Azaryan and Todor Kolev—two names much famous in Bulgaria—at the National Theatre Academy. He participates in “The Street” blockbuster comedy series directed by Tedi Moskov together with Maya Novoselska, Krastio Lafazanov and many other favourites of the Bulgarian audience.

His father, Ivan Donev, was the founder of Naiden Kirov Folk Dance Theater in Rousse, and its director and choreographer until his death in 2012. Since then, Kamen Donev is also Chief Artistic Director of the ensemble. He has won numerous national and international awards in his career so far, including Ikar and Maxim. He has written a book, has worked abroad, but returned to Bulgaria, where he lives with his family today.

In recent years his success is all the more sweeping because of the performances he writes, directs, and performs such as “The Views of a Teacher on the Folk Art,” “The Views of a Teacher on the Common Instruction” and others. At the end of 2015 his performance “On the Weddings” attracted 12,000 spectators at Arena Armeets Hall in Sofia, which is a record attendance at a theatrical production for the country. He also authors skits that are published on the http://shvargalo.com/ website.

If you succeed in digging up tickets for any of his productions scheduled for 2 or even 3 months ahead and go watch it, prepare yourself for a storm of emotions. Kamen Donev is an exceptional improviser who can make you cry with laughter – and that’s no exaggeration. Even when it comes to a line said many a time, it is performed as if it’s just been thought of and said out loud for the first time and with the sincere desire to be immediately shared with you.

His performances are a colorful palette of dance and choreography in which he also invites guests to perform – singers and musicians such as the Boban and Marko Markovic’s Orchestra in “On the Weddings”. A spectacle of folklore music and dances, accompanied by his mocking viewpoint, and combined with his explosive sense of humor are the signature of the artist Kamen Donev, with which he creates a unique insight into and of the performing arts in Bulgaria.

His interviews with have shown to a yet greater extent his sarcasm and harsh outlook on pressing social issues. I’ve seen him taking part in some of the protests two years ago. I’m far from limiting his rich personality within chauvinistic frames, but it’s exactly during these interviews that I cannot help but notice the “typical” traits of character people from Rousse exhibit: he is outspoken, calling a spade a spade, with an assertive and uncompromising opinion and an active citizenship standpoint – a noncommercial perceptivity of a nonconventional personality.