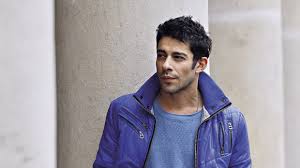 I remember Elby from the time when our high school was the focal point for many of us in those crazy teenage years. A beautiful boy from a senior class with a charmingly alluding and enigmatic smile—all that it took to rocket him into our charts of the few guys I and my best friends fell for. No, it wasn’t me who dreamt about him, but whenever I saw him, though we were never close, it was a fiest for the eye and soul. There are people you simply like without the necessity to know them further. A fleeting glimpse of them is enough to make your day.

Emilian Gatzov known back then among us and now in his career as a music writer as Elbi, is the invisible but impertinent presence behind the music accompanying many theater performances and works with some of our famous theater directors such as Marius Kurkinski, Desislava Shpatova, Cassie Noah Asher. He produced more than 70 theater and dance soundtracks, won the 2007 Ikar award for the music of Desislava Shpatova‘s “Psychosis  4:48” in “Sfumato”. He is also nominated for 2016 Ikar awards the winners of which will be announced on March 27. Among the productions to which he contributed are the “Inspector”, “Open Marriage”, and “Someone visited my soul”.

Outside the theater he works with dancers from NOMAD Dance Academy, Brain Store Project, “Arabesque” ballet, OisNotAcCompany, Kinesthetic Project. He makes music for short movies, does sound editing, delivers sounds for cultural advertising campaigns, creates remixes. The basic techniques he applies, according to the articles about him on the Internet, are voice processing and focus on effects. Besides modelling music, he also plays the synthesizer. He produces his own music – abstract, experimental, unconventional. He uses the so-called granular synthesis, which enables the incorporation of temporal aspects in music, and participates in international art festivals as well.

His life has had interesting twists most probably because of his (obviously) searching character. As a boy he went to piano lessons, later on graduated from the English Language School in the city, then began playing the synthesizer, and studied philosophy until, finally, he managed to find out his calling through an invitation from a friend to participate in a musical project. Here is yet another person who apparently is not afraid of experimenting with himself.

On Youtube.com you can hear the presentation of “Theatre, My Love!” by Valery Petrov and directed by Kasiel Noah Asher – one of the two productions, for the music of which Elby is shortlisted for the 2016 Ikar awards.